The Our Kids review of Camp Hurontario

Pauline Hodgetts, the current director, has recalled how her father, Birnie Hodgetts was caught in a storm during a fishing trip in 1946, and sought shelter in a bay, where he and his brother hunkered down for the night. In the morning, he said “This is where I will have my camp.” It took a bit of work (which Pauline recounts here) but, as improbable as it might seem, he did. Founded in 1947, Hurontario remains today what it was at the beginning: a camp where boys can live and work together, form meaningful relationships, grow leadership skills, and gain a sense of themselves. The most traditional camp activities—canoeing, tripping, sailing, the arts—have been augmented over the years, though done very intentionally to ensure that the focus on values, character, and leadership remain the core of the program.

Choose the right sessions for your child. Filter by activities below. (Currently showing 10 of 10 sessions) 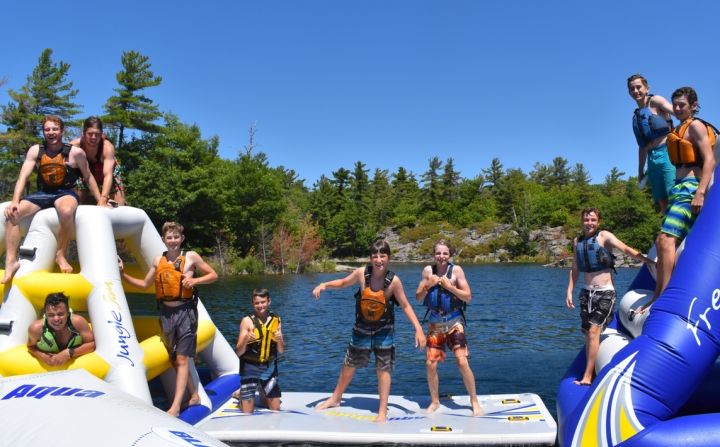 Camp Hurontario has been in the Hodgetts family since it started in 1947. Birnie Hodgetts, my dad, had a vision of  a camp that was unique in both its philsopohy and location . Hurontario is located on a truly magnificent island in the Georgian Bay and we are surrounded by over 300 acres of mainland and  camp islands where  boys from all over the world paddle, kayak, sail to our islands to enjoy  painting, swimming,camp crafts, biology, or  a great game of Capture the Flag. Over Hurontario's excellent history ,we have maintained the philosophy of grouping our boys in small groups with a non-competitive, flexible approach to all the activities. Hurontario has 190 campers and a home grown staff of whom we are so proud of 110- what a ratio to ensures each and every individual the chance to grow and enjoy at his own pace while making life long friends. A terrific place to be on hot summer days!

Camp Hurontario founded thanks to a piano

On a fishing trip in 1946, Birnie Hodgetts and his brother Ted, paddled into what is now Hurontario's main camp bay. They pitched camp and spent a stormy night waiting for dawn to bring them the opportunity to explore this incredible sheltered bay they had found. Soon they realized that they were on a large and very beautiful island  surrounded by pristine lands .After much exploring of who owned the island and the mainland across from the island( Birnie was a visionary who knew that in time he had to have the far shore so in future summers no one could build across from camp island),Birnie set out to find out who owned the property.

Title searches turned up the owners of the lsland .The island was for sale but acquiring the big mainland property was not going to be so easy.Mr Kingsmill owned the 150 acres deeded to him by Queen Victoria for fighting in the terrible Boer War. On hearing Birnie's vision for a children's camp, Mr. Kingsmill wrote back to say he would be happy to sell the property but that he would like to run the camp in partnership with Birnie. Birnie was keen to be sole owner and creator of his vision for a camp and so wrote this back to Mr. Kingsmill. For a long time no more was heard from Mr. Kingsmill and Birnie's vision seemed more and more a remote dream. And then one day, Birnie received a letter from Mr. Kingsmill from Mexico where he was  living telling Birnie that he had fallen in love with a Mexican girl called Carmelita whom he wanted to marry.

Now Carmelita was happy to marry Mr. Kingsmill but her wedding present was to be an English grand piano with music lessons- and Mr. Kingsmill mentioned this to Birnie as Mr. Kingsmill did not have the capabilities to get this piano for his Carmelita.Soon there after, Birnie arranged for a piano to be shipped from England,piano lessons were arranged all in exchange for 150 amazing acres of land in the Georgian Bay!

And so for the price of a piano and piano lessons and a girl called Carmelita ,Hurontario became a camp now enjoying its 71st summer in the Bay.

Thank you for your interest in Camp Hurontario. They will be in touch with you shortly.

Thank you for your interest in Camp Hurontario. They will send you information about this session: