BrainTech Robotics is the place to send your children 7-17 to experience hands-on learning in subjects related to STEM (Science Technology Engineer and Math)  The topics start with Virtual Reality.  Why? Because it is the newest technology being talked about right now.  Where? George Brown - Lakeshore Campus.  When?  Summer Camp 2020

The Our Kids review of BrainTech Robotics

While the STEM concept may seem relatively new, the antecedents aren’t. A telling example is the work of Miss Sophie Wolfe, a teacher at Abraham Lincoln High School in Brooklyn, New York, in the early part of the last century. Beginning in the 1920s, she invited interested students to stay after school to work on high-interest projects, creating a loosely-formed science club that would, in time, influence three Nobel laureates: Paul Berg, Arthur Kornberg, and Jerome Karl. Wolfe sought to stimulate curiosity, enjoyment, collaboration, and the application of the tools of study to real-world problems. Berg said of the experience with Wolfe that “looking back, I realise that nurturing curiosity and the instinct to seek solutions are perhaps the most important contributions that education can make.”

Indeed, that’s exactly what BrainTech is about. While we can easily get caught up in the stuff—the tech resources on hand—it is ultimately just the tools used to get at something greater: nurturing curiosity and the instinct to seek solutions. It’s about education, but it’s also about more than that, including the values of ethical and empathic leadership and cooperation. The programs are hands-on, promoting of an array of behaviours and skills—including effective, spirited communication and collaboration—that build facility with core literacies and their application. There’s real science, but there’s real fun, too, conducted within a setting of true peers, namely kids who share the same passions and speak, as it were, the same language. Summer sessions can be nicely augmented by those offered throughout the year, including afterschool and during key holidays. Extended hours are offered, which is a nice nod to what parents need, namely a bit of flexibility from time to time.

Choose the right sessions for your child. Filter by activities below. (Currently showing 2 of 2 sessions) 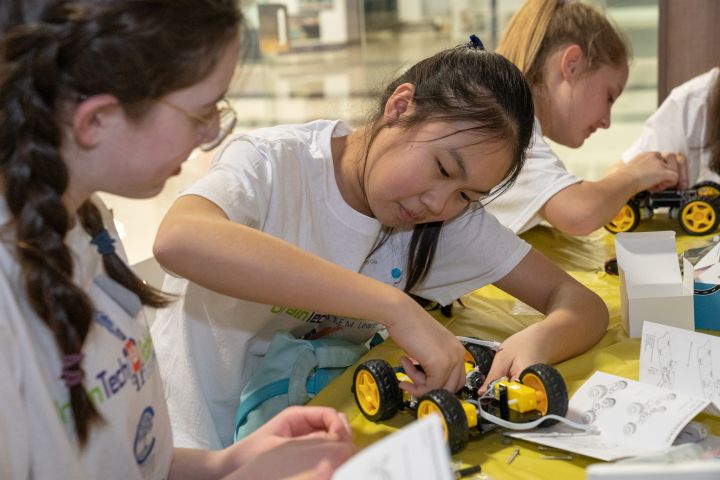 Thank you for your interest in BrainTech Robotics. They will be in touch with you shortly.

Thank you for your interest in BrainTech Robotics. They will send you information about this session: