The Cube STEM Camps are fun! We are a technology-driven, creative and innovative camp program in Toronto. We focus on four primary disciplines: Coding, Robotics, Video Game Design, and specialized programs like Minecraft, Roblox modding and Photoshop. Our camps are engaging, giving kids and teens a chance to try different disciplines in a week packed with fun and learning!

The Our Kids review of The Cube STEM Camps

Many camps don’t conform to some of the common ideas of what camp is, and The Cube is an example of that. The focus is technology, not canoeing or camp craft,  yet the goals of the camp are strikingly similar to those of more traditional programs: they are tools used to bring campers together around common interests and creating opportunities to work and grow together. For the campers, it’s a unique opportunity to work with others of like talents and passions, and to really indulge their curiosities in an engaging setting. It’s perhaps not for every child, but then again, no camp is. Campers finish the sessions with greater confidence, having learned something about themselves. Which, of course, is what all great camps share.

Choose the right sessions for your child. Filter by activities below. (Currently showing 18 of 18 sessions) 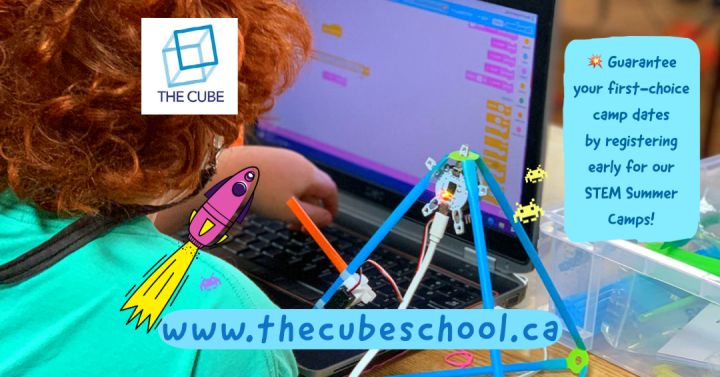 Welcome to The Cube, we encourage you to browse our technology course listings. Our courses teach the broad range of skills based on STEAM principles: Science, Technology, Engineering,  Arts, and Math. From learning programming languages to designing video games, building with EV3 Lego robotics, circuits, and electronics you name its all fun and learning.

The Cube Design and Technology School’s Team No Signal of the FIRST Lego League (FLL) is heading to the provincial championships.

The Cube is located at 2195 Gerrard St. E. and it offer students a number of after-school and extracurricular technology programs.

The students taking part in the FLL are elementary school age, and they are putting the skills they are learning at The Cube to the test at the highest level as they will be taking their robotics project to the Ontario championships on Jan. 12 at Durham College in Oshawa.

The FLL is an international alliance between Lego and FIRST, which stands for For Inspiration and Recognition of Science and Technology.

The FLL challenges teams of students from around the world to come up with solutions to real world problems using robotics and technology. The teams taking part must design, build and program their robot using Lego Mindstorms technology and compete on a table-top playing field.

The challenge for the 2018-19 FLL season was Into Orbit, and it asked students to think like engineers and scientists facing an issue in outer space that needed a solution. The students come up with a team name and work together to take on the challenge

The students at The Cube, who named themselves Team No Signal, learned that astronauts in space don’t get enough nutrients on their journey and often face homesickness. So, they decided to tackle that problem and engineer a solution.

The solution they came up with was the Tower of Peasa (T.O.P.) which can grow large amounts of plants in space without the use of sunlight or gravity. There is a Smart System that coordinates with the T.O.P. to control the mechanical functions according to the needs and data of each plant. The Tower of Peasa is basically a smart garden. The plants give the necessary nutrients to the astronauts as well as giving them a sense of home.

“We all researched, experimented and programmed an app as a team. We realized that the most effective way to improve your mood was through gardening. An astronaut could get the most nutrients from the veggies and in the process enhance his or her frame of mind as well. So, we knew that we were going to grow leafy greens in space to help the astronauts,” said Grade 7 student Zora Sabharwal Lakhera of Team No Signal.

“Also, being away from earth for so long, astronauts start to miss where they came from. Plants will give them a piece of home.”

There are two tiers in the T.O.P., one for the plants and the other for all the tech. The LED lights are placed under the tech tiers shining on the plants. They act as the sun for the plants, the real sun is not needed.

Unfortunately, if the LED lights are too close to plants, the plants could die. So, as the plant grows, Team No Signal developed a method whereby the space between the plant and LED light also increases. This happens with the help of motors, axles, and Lego pieces that push the tech to upper tiers.

Since there is no gravity in space, with the help of an electric water pump, water is directed through pipes to reach the roots of the plants, no gravity needed. The soil and roots absorb the water keeping the plants healthy.

To make the T.O.P. be even more efficient, there is a motor that rotates the T.O.P so the astronaut can keep an eye on all the plants. Everything in the Tower of Peasa is enclosed and compact. It is designed this way so, in case of a leak or dysfunction, all of the problems would remain inside the Tower of Peasa.

In consultation with Taryn Tomlinson, chief of staff at the Canadian Space Agency, one important aspect of the T.O.P. was to consider an easy fix in case it breaks

“So, there is a water reservoir that the tower sits on, that’s where the electric water pump is. To get the water in that reservoir there is a pipe that transfers the water from a larger reservoir. It’s a very simple design,” said Grade 7 student Jasmine Sheikh Deeb

The vision for the Tower of Peasa is that all plants grown inside of it will grow faster and easier than normal.

“Our design is not only for space but can also be beneficial on earth. The vertical farming style of the T.O.P. can reduce space used for agriculture. Also, the tower can grow plants in harsh climates because it can adapt to temperatures. This can help people on earth,” said Grade 6 student Charlotte Kiel

Through a trial process, team No Signal concluded that the Tower of Peasa could grow plants twice as fast as they would grow naturally.

Along with their technology solution, the FLL also judges competing teams on the quality of their presentations and their ability to work together.

“We’re very proud that this is a five boy, five girl team, and both boys and girls collaborated at the robotics table and the project. It seems like having single gender groups would have been easier. However, our mission is to have equal representation in our team. Our team got along really well and faced all challenges with a smile, and really, that’s what makes us stand out,” said Team No Signal member Erin.

Thank you for your interest in The Cube STEM Camps. They will be in touch with you shortly.

Thank you for your interest in The Cube STEM Camps. They will send you information about this session: