King Day Camp is dedicated to high quality programs that promote decision making, problem solving, communication and trust. We provide our campers with an opportunity to gain self-confidence, personal achievement and accomplishment. We believe that KDC offers a unique environment where campers can interact with, appreciate and respect all forms of life. .

The Our Kids review of Seneca College King Day Camp

King Day Camp is located at Seneca College, King Campus in King City, Ontario, within the Oak Ridges Moraine. The location, frankly, couldn’t be better. The camp rightly describes it as a “taste of the north in your own backyard,” and they’re not kidding—in so many ways it really is. The site includes wetland, a lake, extensive forest and an equally extensive trail network. The resources available there are vast, including indoor spaces, a swimming pool, mountain bikes, and world-class high- and low-ropes facilities. It literally has all the amenities that you might find in the best equipped overnight camps, though offering it all to day campers. The staff is large and experienced. There’s a lot to love, to be sure, in what is a very unique offering.

Activities available at this camp: (Currently showing 1 of 1 sessions) 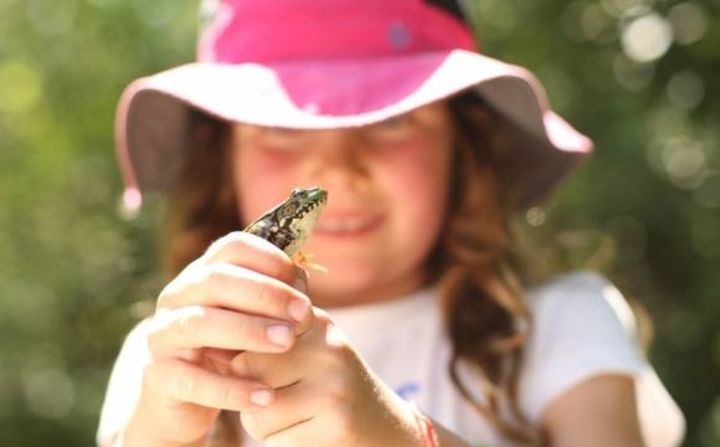 Kelly joined Seneca College and the King Day Camp team in April 2012 and brought to Seneca a wealth of camp programming and operations experience in both day and residential camp settings. Supported by a degree in Kinesiology & Health Science from York University as well as a Certificate in Sport Administration, Kelly has been working in a leadership capacity in the camping industry for over two-decades with reputable organizations such as: The Town of Markham, Parks, Recreation & Culture; the Canadian Tennis Association; Ontario Place; and, the Canadian Diabetes Association. Kelly has also been active as a consultant in the camping arena and has assisted several not-for-profit associations, municipalities and private camps with their programming, health and safety plans, and partnership development programs.

Kelly has a passion for hiking and being in the outdoors and currently holds the record for the fastest hike across the entire Oak Ridges’ Moraine Trail where she hiked 300km’s in just seven days in the Fall of 2016. Kelly is a certified Advanced Medical First Responder (AMFR).

Enter story here... "Camp for me, describe my life. It has been a big part of making me who I am. I have been a part of camp for my whole life. As a kid I attended different camps and when I was too old to be a camper I made sure to stay associated by getting a camp job. Camp was with me when I was growing and learning about relationships and accepatance. Camp has given me confidence, ambition, empathy, enthusiasm, coping skills, relationships and most importantly, a safe place to express who I am..I LOVE CAMP! It is funny because so many of my friends that never attended camp did not undersatnd the camp family and the commitement that comes so easily towards it. Camp taught me the type of person I wanted to be and also led me to exploring new experiences. Camp introduced me to people with special needs which is now my chosen career path. I owe camp so much; a debt I will repay by always remaining part of the camp family. Camp makes the world a better place with the lessons and e xperiences it teaches and allows for. Thank you camp for all you do! " Christine, camper and staff. ...

Enter story here... "I like going to camp because it is really fun. Some of the stuff I like doing is rock climbing, archery, swimming and kayaking. Another thing that I like about camp is that I make new friends, the Counsellors and all the other staff are really nice. Camp has changed my life a lot. It has taught me a lot of skills, now I feel more confident about doing hard things. All the staff at camp encourage and help you do things. I look forward every year to go to camp because I get to do the skills I wasn't able to do before. ...

Camp can change your life

Enter story here... "As soon as you go to camp you'll realize that it's the funnest place on earth! You can do so many different things like rock climbing, high ropes course, the swing, zip line, sailing, and lots more! After you do the fun stuff in the morning you can go swimming. That's not all, camp can change your life to, it can make you happier, friendlier to people and things, you can even have more fun! ...

Enter story here... "As a KDC camper I was surrounded by positive role models that inspired me to become a KDC staff member. As a Staff, I realized that to be able to provide the safe, fun and supportive camp experience to campers that I was exposed to is priceless. Each year I learned an expodential amount about leadership, outdoor skills and other valuable life skills. What I have learned from KDC will continue to benefit me throughout life, and for that I will always be grateful." ...

Enter story here... " I always love going to King Day Camp. The Counsellors are so much fun, the days are filled with great activities, and I've made special friends. I want to be a Counsellor when I'm older!" ...

Thank you for your interest in Seneca College King Day Camp. They will be in touch with you shortly.

Thank you for your interest in Seneca College King Day Camp. They will send you information about this session: